My review of "Building Gods" 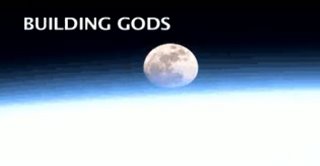 There is a rough-cut available on Google Video of the Four Door Films documentary, "Building Gods."

The video tackles the issue of pending greater-than-human artificial intelligence and the possible ramifications. Four key philosophers are interviewed in the documentary, including the IEET's Nick Bostrom, with the other three being Kevin Warwick, Hugo De Garis, and Anne Foerst. The tone is mostly grim and eerie, but a wide spectrum of topics are discussed, including transhumanism, mind-machine mergers, uploading, and artificial superintelligence.

The documentary itself is scheduled to be released later this summer. Based on the quality of the film I'd have to say it will receive limited attention (I can't see the final cut improving upon it too greatly).

Initial responses on the WTA-talk list were negative, but after watching the 90 minute film I didn't think it was so bad. In fact, I thought it was downright interesting and provocative. I actually started to take down notes while watching it, and it has given me a number of ideas for future blog entries.

Of the four philosophers interviewed, Anne Foerst was clearly the weakest. She was the token theologian {exasperated sigh}; whenever documentaries like these are put together, it often seems that producers feel compelled to put a religious representative on screen to offer some sort of twisted "balance." I've noticed, for example, that discussions about the possibility of extraterrestrial life often include the insight of a priest or rabbi -- as if they actually have anything interesting to say about the intricacies of astrobiology or the Drake Equation.

That said about Foerst's 'role' in "Building Gods", however, her work at MIT and her willingness to extend personhood beyond Homo sapiens, made her presence not altogether irrelevant.

Nick Bostrom was his usual eloquent self. He was very well spoken and he represented himself and transhumanism quite well. Some of the themes that Bostrom touched upon included consciousness uploading, the unlikelihood of cyborgs, and the SAI goal problem. I didn't feel that Bostrom played into the sensationalist feel of the documentary and his comments were fairly level headed.

Kevin Warwick, on the other hand, was a different story. Regrettably, of the four thinkers interviewed, Warwick was given the most attention. I say regrettably because he fed right into the alarmist tone of the video. At one point he compared the potential differences between humans and posthumans as those that currently differentiate humans from cows. He even said -- and I still can't believe he said this -- that when humans will talk to posthumans it will sound akin to mooing. Consequently, argued Warwick, there will be no social dichotomy between humans and posthumans as they won't even be on the same existential wavelength.

This is exactly the kind of thing that will scare the hell out of someone who is completely new to these concepts. The implication that posthumans and humans won't communicate with other, or that posthumans will treat humans as cows, is as ridiculous as it is false. I simply don't foresee there being posthuman indifference towards unaugmented humanity.

Hugo De Garis, like Warwick, was also a mixed bag. If Warwick didn't scare you in this documentary, De Garis most certainly did. He used his own jargon to describe the pending battle between 'terrans' and 'cosmists' (ie luddites vs. futurists). In Hegelian fashion, he compared this future struggle to the 19th and 20th century struggle about the ownership of capital. De Garis sees the future as one split by a conflict between those who are terrified of the rise of SAI versus those who wish to see humanity reach its true potential.

Thankfully, there was some sentiment expressed in the documentary that this scenario may not play itself out. Even De Garis admitted that humans and machines may evolve and merge in concert, thus avoiding this kind of sociological split. He referred to the adherents of this middle way as the 'cyborgians,' but seemed embarrassed to have to say it. A middle way, after all, would ruin his alarmist non-normative sci-fi action drama vision of the future.

Rather, the issue will be, in my opinion, not so much about the pending struggle between 'terrans' and 'cosmists' as it will be about the difficulty in ensuring safe and universal access to critical enhancement technologies. Most people in the next several generations will be early adopters of enhancement technologies. Our children will consider enhancements to be as matter of fact as iPods and text messaging are today. Consequently, predictions about the AI/human dichotomy are false; transhumanism will be in effect and we will grow both AI and SAI from the human brain, not from raw machines.

In regards to Warwick and De Garis, however, I don't want to paint an overly negative picture of their contribution to this film. Both thinkers have a lot to offer in this conversation, and their thoughts and insights were captured quite well. There's lots of food for thought here, and I'm still digesting it all.

Interspersed between the interviews was stock footage of old interviews and cheesy sci-fi films. There were a number of shots with Honda's ASIMO in it, played back in slow motion and set to spooky music in the background. ASIMO never looked so evil.

While “Building Gods” certainly painted the future in a gray and ambiguous light, it was not explicitly anti-transhumanist. At one point, a blurb on the screen noted that, "Transhumanists advocate the ethical advancements of technology." For those familiar with these concepts, the video will be interesting and provocative; for those new to these concepts, the video may come across as quite frightening and alarmist.

Interestingly, the documentary skirted around the issue of the Singularity. But now that I think about it, one could make a case that the entire film was about the Singularity -- just not exactly stated as such.

Costa Rica Hotels For business
trips or vacation travel, let us take care of all the details for your itinerary.
;http://www.costaricaguides.com

Sensationalism is bad... this documentary looks like a loser. (Though I have yet to watch it.)

The potential benefits of successful superintelligence should always be mentioned along with the potential risks. Corny sci-fi dystopian future visions are just another type of entertainment, and do not represent genuine concern with the problem but rather a kind of nutty paranoia.

"no social dichotomy between humans and posthumans as they won't even be on the same existential wavelength" - this could be true to an extent, though. It just shouldn't be presented in an alarmist way.

I will probably end up watching this for Bostrom. Thanks for the review, George!

Galapagos Islands, Tours, Hotels,
and more... Ecuador Travel Site - A guide to
have the greatest vacations in one of the most beautiful countries in the world,
find all the main info about Ecuador: history, tours, hotels, Galapagos islands
cruises, car rental. You can find more info at.

I think this topic is very different and should be more pages like this, it's
very actually, and I'd like to invited you to visit my page:10/325- Vicoprofen - Lortab- Tylenol
#3- Ativan
All Major Medications are available right here at: http://www.crdrx.com

This page is fantastic, the infomation you show us is really interesting and is good written. Do you want to see something more? you can visit too: The marijuana careis an original annual plant of Asia,of diverse mountain ranges of the Himalaya.
Head Shop, Herbal Grinders
Bongs, Glass Pipe. Visit us for more info at: http://www.headshopinternational.com/

I have the pleasure to visiting your site
You may visit phetermine
there.

I have the pleasure to visiting your site. Its informative and helpful, you may want to read about obesity and overweight health problems, losing weight, calories and "How You Can Lower Your Health Risks" at phentermine adipex ionamin meridia xenical site.