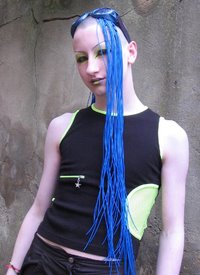 Cyberculture is a burgeoning youth subculture that is an intermixture of several scenes, including cyberpunk, goth, rivethead, rave, and clubbing. Individuals in cyberculture identify themselves as "cyber" or "cybergoth," and are as interested in fashion and dancing as they are in new and future technology. Primarily a cultural phenomenon of the United Kingdom, cybers can also be found in New York and other large metropolitan areas. There's even a Canadian cybergoth forum. 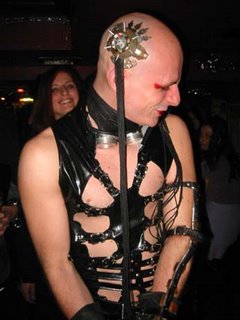 Fashionwise, cyber clothing resembles a combination of industrial, rave and goth styles. Think of goth, but with bright colours. Common themes include contrasts of black or white combined with luminous neon or UV-reactive colours and materials. Some wear LED lights on their clothing or in their hair. Cybers also tend to have brightly coloured and often stylised hair, large shoes or boots, various forms of body modification, the presence of superfluous goggles (especially aviator-style), androgyny and the influence of cyberpunk or anime themes.

As for the subculture itself, cybers have a fascination with such topics as computers, the internet, technology, cybernetic augmentation and artificial intelligence. Clearly, these are elements derived from the cyberpunk side of things. As for the more gothic elements, they include a sense of apathy (supposedly towards issues cyberpunks would be enraged about), a questioning of mortality especially with regards to enhancements and AI (in a way, taking the whole goth obsession with death and turning it on its head to question the very definition of life itself), along with a number of gothic fashion elements and related music.

According to Devi of the Take A Byte v1.0 site, here are the top 10 ways to spot a cybergoth:

10. They have their own REN value
9. They look like a goth, but in colour
8. They bleed caffine
7. They carry a raygun or lightsabre
6. You need sunglasses just to look at them
5. They have neural plugs in their neck and a barcode on their arm
4. Their limbs are silver and shiny
3. They have so many LEDs on them that in the dark airplanes often land on them
2. They have no real hair
1. They wear goggles even out of the pool

Be sure to visit the Take a Byte site and take the test to see if you're a potential cyber in the making.

As the old song goes, I was "Born Too Late" to be a cyber-goth. But if it is weirdness for weirdness's sake that they want, I can outweird any cyber-goth.

I don't see any substance here. These kids just play-act at "transhumanity" with nothing tangible to show for it, much like the Extropians in the early 1990's. They could just as well wear Guy Fawkes costumes, for all the difference that would make in the deteriorating political situation.