Do You Believe in Science? 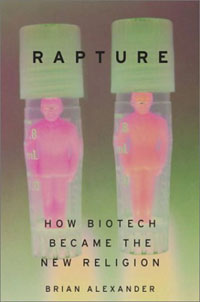 In Rapture, Brian Alexander describes how biotechnology and boosterism have made transhumanism the next big thing

Throughout history, humans have been obsessed with transcending the body and living forever. Until very recently, this primarily manifested as one religion or another. But over the past several decades, and especially the past several years, the promise of science in general and biotechnology in particular has given rise to a new cultural phenomenon, one now widely referred to as transhumanism.

While self-described transhumanists were long hard to find, confined to such fringe hotbeds as California, this is no longer the case. Such topics as extreme longevity, human cloning and human genetic engineering, once freely discussed only at sci-fi conventions, are rapidly entering the domain of academic discussion and receiving serious scientific attention.

This is the essence of Brian Alexander's latest book, Rapture: How Biotech Became the New Religion, a brilliantly researched and wonderfully written work about transhumanism's journey from marginal to mainstream. Alexander, a former contributing editor for biotechnology at Wired magazine, chronicles the cultural and scientific roots of transhumanism and their remarkable intersection in the late 20th century.

At times supportive, and at others critical, Rapture is a revealing and entertaining look into the culture of unhindered techno-optimism that showcases transhumanists as important pilgrims for our times.

As someone who has written about the biotech industry for years, Alexander is well-positioned to cover both the science and sentiment behind the transhumanist revolution. He created a stir several years ago, for example, when a Wired cover article of his on human cloning spawned congressional investigations and created the impetus for a challenge among would-be cloners. He knows of what he speaks.

And despite describing himself as a scientific layman, Alexander shows a firm grasp of the science, technologies and issues in question. Importantly, he writes with an informed and tempered perspective, not from the cynical cheap seats from where others pooh-pooh seemingly eccentric Extropians and immortalists, or brand scientists as "mad" when they create glow-in-the-dark transgenic monkeys with jellyfish DNA.

The result is an accurate and compelling look into a subculture that's gaining credibility and respect with each passing scientific breakthrough. Conferences, conventions and cultural groups now feature a healthy mix of scientists and cultural facilitators, argues Alexander, who are spurred on by "heroes" such as biotech CEO William Haseltine and cloning activist Randolfe H. Wicker.

But as Alexander points out, it wasn't always this way. Scientists in particular have been reticent for decades to speak openly about such things as "negligible senescence" or human genetic engineering for various reasons—some for fear of losing funding and credibility, others the victims of limited imaginations or myopic hyper-specializiation.

One scientist who wasn't afraid to put his views forward, a man who Alexander calls "The Prophet," was the biologist JBS Haldane. It was Haldane who, in his remarkable 1923 speech Daedalus or Science and the Future, set the tone for speculative biotech in the 20th century. "Haldane is a hero not only because of his prescience, his uncanny predictions of in vitro fertilization, gene therapy, and hormone therapy, but because he gave biology power." Daedalus, says Alexander, challenged young biologists to throw off old assumptions and aim high.

In the post-Haldane era, it was not just the scientists who were inspired, but hopeful and forward-looking people in general—people such as FM 2030, Robert Ettinger, Max More and Natasha Vita-More. While the scientists were busy working on breakthroughs, these cultural facilitators were actively figuring out how to use and promote the coming technologies. Cultural posthumanism was born.

And eventually, the enthusiasm from these two independent camps converged. Over the past several years—thanks in no small part to the successful mapping of the human genome and improved insight into aging—today's emerging techno-optimistic climate began to take shape.

While good, however, Rapture does have some bugs. While remarkably thorough, for example, there are glaring omissions. One is that there should have been an entire chapter on pre-20th century transhumanist influences rather than the book's several hurried pages. Addressing the European Humanists and the Enlightenment is absolutely necessary in any historical discussion of transhumanism, including the influence of such thinkers as Condorcet and Hooke on modern thought.

Alexander also ignores the remarkable work of the Jesuit mystic Pierre Teilhard de Chardin, who melded religious ideals with materialism earlier this century. Many transhumanists today first came into contact with the whole outlook through his writing.

And even though it's fairly young, the World Transhumanist Association should have received mention, especially for its efforts to promote transhumanism in the context of progressive democracy. Fringe or not, human enhancement is poised to create some of the most controversial and hotly contested political battlegrounds of the coming decades.

All in all, Rapture is an important book for transhumanists, transhumanist sympathizers and those interested in how fringe ideas enter the mainstream. And with all its colorful characters, it also makes for a great story of personal courage and conviction in the face of opposition.

The book should be read by anyone interested in the biotech revolution, whether they support it or condemn it. At the very least, readers will have an increased appreciation of the people, science and culture behind transhumanism, radical life extension and issues of human enhancement, all of which are poised to shape tomorrow's world at least as much as religions shaped today's.