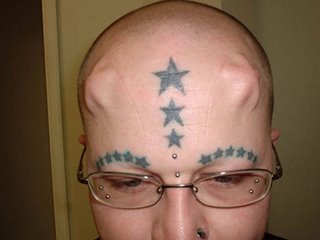 Quinn Norton has published an article in Wired called Body Artists Customize Your Flesh in which he describes one of the more radical trends in body modification, namely subdermal implants.

Bodymodders like Larratt tend to have an ear to the ground when it comes to new medical technologies. Always on the lookout for novel forms of morphological manipulation, the body mod community has been traditionally sympathetic to transhumanism, envisioning the day when such things as transgenics, cybernetics, and glow-in-the-dark skin are technically feasible.

Consequently, it came as little surprise to me when, during TransVision 2004 (the World Transhumanist Association's annual conference), a good size continigent of bodymodders were present at the event.

Today, in addition to tattoos, piercings, and scarification, body modifiers can now go about getting subdermal implants, which is essentially a raised area on the skin in a shape of the artist's choosing. As Norton notes in his Wired article, implants can be any form you can think of, from Star Trek ridges and small horns, to little stars and hearts sprayed across the chest. "Many people with body modifications have combined their implants with tattoos to create often beautiful or terrible effects," writes Norton.

Larratt estimates that at least 50,000 people worldwide have artistic implants. But with this high number comes considerable concern, as the procedure is, for all intents and purposes, surgery. There are far too many unqualified individuals performing the work, claims Norton, heighening the risk of infection and damage to the nerve and lymphatic system. In some cases, the implants cannot be removed. And needless to say, malpractice insurance doesn't cover these types of procedures.

As a result, there is a call for artists to get a higher education before they pull out their cutting implements. But as Norton notes, the procedure is unlikely to be adopted by the most qualified people to do it anytime soon, namely plastic surgeons.

Most medical professionals reject it on ethical grounds. They claim that it is nothing more than ritualistic scarification and self-mutilation. They argue that it is no place for a doctor that has "taken the Hippocratic Oath and wants to serve mankind."

Undaunted, the body modification community continues to move forward and innovate despite the lack of acceptance and the risks.

Some bodymodders are currently working with optical-grade silicone, trying to create implants that literally glow underneath the skin. Larratt says the next step is to make implants functional in some way. "There's crossover with people doing RFID work," he says, "there's a large number of people that want to build active implants." And with cybernetics, genomics and transgenics on the horizon, bodymodders will undoubtedly exploit those possibilities to the fullest.

Given their penchant for experimentation, and given the extreme potential for body modification technologies, it's likely that ain't seen nothin' yet.