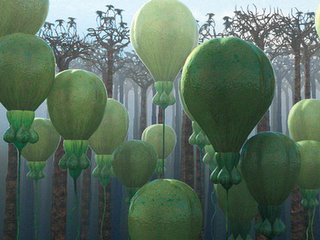 There's a neat article in this month's Wired about SETI's imaginings of other habitable planets and the possible organisms that might crawl on their surfaces:

On Aurelia, an Earth-sized planet half shrouded in perpetual darkness, vast floodplains give way to groves of treelike stinger fans that use ambulatory roots to creep across the muddy surface. On Blue Moon, a lunar orb in an adjacent solar system light-years from Aurelia, winged skywhales gulp aerial plankton suspended in the dense atmosphere, while balloon plants float beneath the canopies of massive pagoda tree forests, buoyed by hydrogen gas-filled membranes like miniature Hindenburgs.

SETI wanted to make the worlds as realistic as possible, so they ran detailed climate simulations on a desktop Linux box, allowing the scientists to observe the consequences on habitability of a range of complex atmospheric variables like thermal circulation and precipitation levels.

SETI also applied the principles of natural selection and adaptation to populate the planets, determining creature leg lengths and wingspans using biomechanics algorithms. They established vegetation height and characteristics according to factors like available light and the amount of carbon dioxide in the atmosphere. 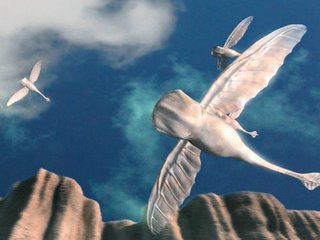 While I laud their efforts, I also look at these renderings with a grain of salt (there are more images at the Wired article). While the science seems relatively sound, there appears to be a dash of whimsey associated with each creature.

The kite creatures, for example, seem like far too easy prey, and the flying whales are a bit much.

Whales developed on Earth out of such environmental moulders as our particular level of gravity and how that relates to hydrodynamics and size. Given a low gravity planet, I'm dubious that whales would evolve in the first place, let alone evolve for flight. Not too many creatures have evolved from marine to flying animal -- it doesn't seem like a very good adaptation.

I'm also wary of seeing astrobiologists stray too far outside our own planetary example. When it comes to the expression of DNA, I guess I lack imagination -- but I have a suspicion that the conditions for the existence of complex life in the Universe are incredibly stringent.

It's been said that we live on the Goldilocks planet and it is just "right for life." Consequently, we need to be Copernican in our attitudes and assume that we're not just average or unordinary, but hyper-typical.

But that's why we have astrobiologists who have more imagination to prove me wrong.