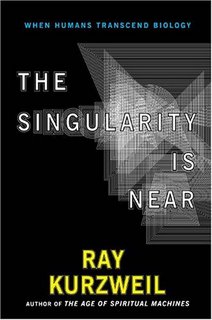 [via BoingBoing] Kevin Kelly takes a look at Ray Kurzweil's latest book, The Singularity is Near: When Humans Transcend Biology

This book offers three things that will make it a seminal document. 1) It brokers a new idea, not widely known. 2) The idea is about as big as you can get: the Singularity -- all the change in the last millions years will be superseded by the change in the next five minutes, and 3) It is an idea that demands informed response. The book's claims are so footnoted, documented, graphed, argued, and plausible in small detail, that it requires the equal in response. Yet its claims are so outrageous that if true, it would mean... well ... the end of the world as we know it, and the beginning of Utopia. Ray Kurzweil has taken all the strands of the Singularity meme circulating in the last decades and has united them into a single tome which he has nailed on our front door. I suspect this will be one of the most cited books of the decade. Like Paul Erlich's upsetting 1972 book Population Bomb, fan or foe, it's the wave at epicenter you have to start with.

Starred Review. Renowned inventor Kurzweil (The Age of Spiritual Machines) may be technology's most credibly hyperbolic optimist. Elsewhere he has argued that eliminating fat intake can prevent cancer; here, his quarry is the future of consciousness and intelligence. Humankind, it runs, is at the threshold of an epoch ("the singularity," a reference to the theoretical limitlessness of exponential expansion) that will see the merging of our biology with the staggering achievements of "GNR" (genetics, nanotechnology and robotics) to create a species of unrecognizably high intelligence, durability, comprehension, memory and so on. The word "unrecognizable" is not chosen lightly: wherever this is heading, it won't look like us. Kurzweil's argument is necessarily twofold: it's not enough to argue that there are virtually no constraints on our capacity; he must also convince readers that such developments are desirable. In essence, he conflates the wholesale transformation of the species with "immortality," for which read a repeal of human limit. In less capable hands, this phantasmagoria of speculative extrapolation, which incorporates a bewildering variety of charts, quotations, playful Socratic dialogues and sidebars, would be easier to dismiss. But Kurzweil is a true scientist—a large-minded one at that—and gives due space both to "the panoply of existential risks" as he sees them and the many presumed lines of attack others might bring to bear. What's arresting isn't the degree to which Kurzweil's heady and bracing vision fails to convince—given the scope of his projections, that's inevitable—but the degree to which it seems downright plausible.