Dalai Lama: The Universe in a Single Atom 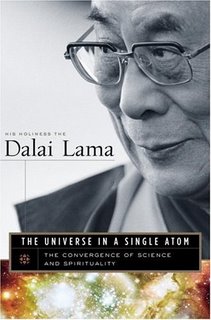 I'm not a huge fan of Tibetan Buddhism (I'm more partial to the existentialist Buddhism of Stephen Batchelor), but this looks very interesting (particularly his opinions re: genetic modification of offspring). But as The Dalai Lama himself once said, "My Tibetan goals are the same as those of Western science: to serve humanity and to make better human beings."

The Universe in a Single Atom: The Convergence of Science and Spirituality
by Dalai Lama XIV, Bstan-dzin-rgya-mtsho

From Publishers Weekly
"As the Dalai Lama observes in this wise and humble book, dialogue between scientists and those interested in spirituality is important because science is not neutral; it can be used for good or ill, and we must approach scientific inquiry with compassion and empathy. Similarly, a spirituality that ignores science can quickly become a rigid fundamentalism. Sometimes the Dalai Lama discovers similarities between the two fields. For example, Einstein's idea that time is relative dovetails neatly with Buddhist philosophical understandings of time. Still, His Holiness does not accept all scientific thinking as holy writ: though he is intrigued by scientific stories of origins, like the Big Bang theory, Buddhism holds that the universe is "infinite and beginningless." The penultimate chapter brings ethical considerations to bear on technological advancements in genetics. The Dalai Lama gently suggests that although parents who select certain genetic traits for their children may intend to give their children a leg up, they may in fact simply be capitulating to a social pressure that favors, say, boys over girls or tall people over short. He also cautions that we do not know the long-term consequences of genetically modifying our crops. In fact, it is disappointing that the Dalai Lama devotes only 18 pages to these urgent and complex topics. Perhaps this prolific author has a sequel in the works."

From Booklist
"Fascinated by science since boyhood, the Dalai Lama, unlike fundamentalists who resist scientific realities, has become convinced that a dialogue between religion and science will advance the wisdom of both disciplines and greatly benefit humankind. He explains why in illuminating explications of how Buddhism and science are both predicated on focused observation, reasoning, and the ability to abandon outmoded ideas in the ongoing search for reality. He compares quantum physics with Buddhist philosophy and reveals how the theory of evolution echoes the Buddhist understanding that all of life is interconnected and in flux, and he writes with deep feeling about the pressing ethical questions raised by advancements in biotechnology. For all the provocative and detailed reasoning found in this soulful and mind-expanding book, what emerges most powerfully is the Dalai Lama's belief that science must embrace Buddhism's mission and work toward increasing compassion and alleviating suffering." -- Donna Seaman