Peter Ward: Life as We Do Not Know It 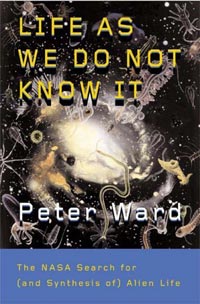 Ward's Rare Earth (coauthored with Donald Brownlee) suggested the unlikelihood of our finding an alien race as complex and evolved as humankind; if such beings exist, they're too far away for us to make contact with. But what about more basic forms of life right here in our solar system? Ward, an investigator with NASA's Astrobiology Institute, believes researchers might be taking the wrong approach by looking only for earthly DNA-based life forms. Truly alien life, he argues, might have completely different origins; even Earth has untold numbers of viruses composed entirely of RNA, and scientists have created similar genetic material in laboratories, so who's to say silicon-based life-forms are impossible? After introducing readers to the building blocks of life and the new ways they might be arranged, Ward speculates on what types of microbes we might find on other planets and their satellites. He recommends that future manned space expeditions include paleontologists and biochemists to follow up on suggestive evidence collected by space probes. The science is neatly laid out, and readers willing to follow his daring, scientifically based speculations will find their imaginations spurred.

Paleontologist Ward--who has written previously about extinctions (Gorgon, 2004), evolution (Future Evolution, 2001), and planetary geology (Rare Earth, 2003)--indulges in some freewheeling yet reasonable speculation on what forms of life we are likely to discover on other worlds. In the past five years, astronomers have uncovered much new environmental data on the planets and satellites in our solar system, most notably from the two Martian rovers that are still scuttling about on the surface. The problem with recognizing alien life, as Ward sees it, is that science defines it too narrowly; biologists must expand their definition to encompass forms that do not resemble terrestrial carbon-and-DNA-based packages. He begins by declaring that viruses are alive and goes on to classify other exotic chemical combinations that could evolve in an alien environment. Ward says that machines like the rovers are not set up to detect "life as we do not know it" and that it will take missions with human crews to discover what we don't expect. Certainly thought--provoking.