Many things have been said about the recent film adaptation of the Watchmen graphic novel series, particularly the ways in which it has come to redefine the superhero genre. While it's certainly a brave film that's succeeded in pushing a number of boundaries, I believe its true strength lies in its various philosophical themes and social commentary. In particular, I was drawn to the discussions of technological power and the innovative ways in which this commentary was represented on the screen.

Looked at metaphorically, Watchmen is largely a treatise on the use and misuse of advanced technologies and the resultant soul-searching, dehumanization and loss of innocence that inevitably follows. It's a cynical and sobering look at weapons technologies in particular and how they often work to create disparities -- whether it be the militaristic disparities between combatant nations or the ways in which it pulls people apart.

And with the presence of a god-like posthuman superhero, Watchmen shows the ways in which a greater-than-human intelligence could either serve humanity's needs or bring it to its knees.

Doctor Manhattan and The Bomb

By far, the most powerful of the Watchmen is Doctor Manhattan, a "quantum superhero" with powers so incredible that he is essentially considered a god. He has the ability to manipulate matter with his thoughts, allowing him to teleport, change his size, copy himself, move objects through space and disintegrate people. His powers are frightening to say the least.

As his name suggests, Manhattan is the walking, talking personification of the nuclear bomb. And as it turns out, god happens to be an American -- a god that the U.S. government isn't afraid to utilize. In Strangelovian manner, the United States uses Manhattan (both directly and indirectly) as a super-weapon to stave off the Soviet Union. Disturbingly, Manhattan does as he's told. He is indifferent to the nature of his powers and the horrors he can unleash; like the bomb itself -- or any technology for that matter -- Dr. Manhattan is largely neutral. It's those who choose to unleash his awful powers who make the moral judgments.

But as the unfolding story suggests, there are consequences to the use of such power.

Take the episode in Vietnam, for example, and the awesome image of the gigantic Doctor Manhattan cutting a swath through the jungle and annihilating the Viet Cong with the wave of his hands. As the explosions around him would indicate, this is an alternate history in metaphor -- one in which the United States has chosen to use nuclear weapons in Vietnam.

This alternate history in which the U.S. wins in Vietnam doesn't end there, however. The impact of this action is felt back home; sure, the Americans may have won, but the resulting social climate and negative reaction results in a completely decayed and degraded America -- one whose population no longer wants anything to do with "superheros."

A cynical and pessimistic outlook 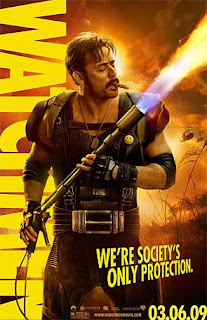 And it's not just Dr. Manhattan -- all the Watchmen can be seen as representing the impacts of one-sided weapons technologies. The flame throwing Edward Blake was right alongside Manhattan in Vietnam and for good reason. Blake is there to represent the dark and ugly side of America -- a symbol for the arrogant and jaded sentiment that tends to accompany militaristic success. Edward Blake represents the worst of a belligerent and techno-happy America as he runs amok with callous indifference.

The cynicism of the Watchmen doesn't stop there. Even the final outcome of the story, where millions of deaths are the only way to prevent all out human extinction, is a sobering look at the powers at our disposal. It's only through the use of apocalyptic scale technologies that world peace can be secured; it's The Day the Earth Stood Still all over again, but this time with the fist coming down hard.

Doctor Manhattan and the posthuman

"I've walked across the sun. I've seen events so tiny and so fast they hardly can be said to have occurred at all, but you... you are a man. And this world's smartest man means no more to me than does its smartest termite." -- Doctor Manhattan to Ozymandias

Interestingly, the Watchmen commentary goes beyond the advent of nuclear weapons. The discussion extends to the potential emergence of those powers that radically exceed human capacities. Given the incredible scale of Dr. Manhattan's abilities, he can also be seen as a personified instantiation of a posthuman or superintelligent artificial intelligence (SAI). The film explores the ways in which such a power could be an alienating, alienated, and dehumanizing force.

For context, transhumanists and speculative AI theorists consider the emergence of an SAI -- an entity with intellectual capacities that are radically more advanced than the human mind (such an intelligence could emerge from an AI or as an outgrowth from a highly modified human brain). Such discussions have evoked images of god-like intelligences capable of reworking human affairs and even the fabric of the Universe itself. Because we lack the proper terminology or frame to envision such an intelligence, many have referred to this potential AI as being 'god-like.' 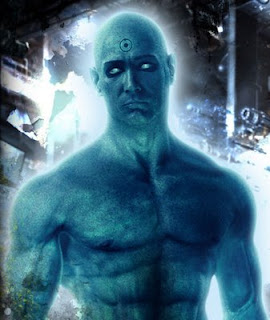 Doctor Manhattan encapsulates many of these characteristics. He is the reluctant god, one who is largely indifferent to human affairs. Manhattan lives in the quantum universe and does not perceive time with a linear perspective, something that alienates him even further from those around him. Consequently, his interests and intellectual endeavors lead him to a different mind-space altogether; he is primarily concerned with the inner workings and unfolding of the Universe. His ability to relate to humanity recedes with each passing day, almost to the point where he can no longer distinguish between a living and dead human being.

This is a fear levied by some futurists as they worry about the emergence of a poorly programmed or indifferent SAI. Indeed, how and why would an intellect that runs at a radically increased clock-speed and expanded/alternative mind-space relate to unaugmented humans? It's an open question. In Watchmen this problem nearly results in human extinction, not due to the actions of Manhattan, but out of inaction and apathy.

At one point in the film, Manhattan escapes to Mars so that he can avoid human contact. He does so because he finds personal interaction with humans annoying and a distraction. This is a god who would rather retreat into himself, preferring solitude on Mars where he can ruminate on existence and construct masterful structures.

Eventually Laurie Jupiter convinces Manhattan to come back to Earth and rescue humanity from nuclear armageddon -- but it's on account of an improbable existential quirk that he changes his mind -- the closest he can come to actually caring.

[As an aside, and looking as his inability to empathize and relate to other people, Doctor Manhattan can also be seen as an 'autistic superhero'. He is very much locked-in to his inner life, he has a fascination with the minutiae of all that is around him, and he is the beneficiary of prodigious talents. Sounds very autistic to me.]

Despite the seemingly happy ending (even in consideration of the millions of deaths that were required to make it happen), Watchmen leaves the viewer with a profound sense of defeat. Indeed, what kind of a world do we live in if megadeaths are required to keep the peace? Is near-armageddon required to keep us in line? Will a common enemy (climate change, perhaps) unite all people in a common cause?

Or is all this rather pedestrian and grossly over-simplified? And what about the potential benefits that technologies may bring?

These are all questions for discussion at the very least. Watchmen leaves the viewer asking more questions than when they came in -- certainly the sign of a great and provocative film.
George at 3/29/2009
Share